Open, honest, daring. The tale of the legendary PaPa_Capes

You and your team qualified for the 2017 VS Gaming League LAN Championship to be held in October at rAge Johannesburg! Congratulations. How does it feel?
It is epic and brilliant. It will be my first time at rAge and at a live tournament. It feels amazing and we worked hard for this.

What is your expectations and goals for the tournament?
To win obviously! At the age of 25 I am playing to win. But also, I hope we can get the South African community interested and on the map. And also to get the international community seeing the mad skillz of the local players.

How are you and your team preparing for it?
I put in a minimum of 6 hours per day of practice, and a max of 12 hours. I mostly play 3v3 and do training. I practice being more consistent and more of a power- and reliable player for my team. The team has a fixed scheduled as well of when we practice which is great.

Define your playstyle:
An all-rounded, defensive, offensive, calculated player. I am good at prediction and anticipation. I would say my weakness is that I sometimes have tunnel vision but because of my accuracy I can score. But I feel I can work on my passing game.

You are quite famous for physically demolishing the cars of your opponents. Many people get mad at those who blow them up (demos) during games. Thoughts?
Buy a punching bag and get your frustration out on that if demos during a game bothers you. Psyonix didn’t give us local servers but they gave us demos – use it. It is a strategy and I am going to use it to get the upper hand. I won’t do it because I am bored, bad, or I don’t like it. Every time I do it it is strategic. Because it used to frustrate me when people demo’d me, I know now that it gets into the head of my opponent.

Is there a difference between demo’ing for the sake of it, and tactical coordinated bullying?
Ja, it is silly to only go for exterminations; that is for Minecraft players. If you get the demo award at the end of a game then I doubt it is strategic. There is no point in demo’ing if it is just for the sake of it. For me there is a method to the madness, but that is for tactical demos. Also, if you don’t have boost you can go for a bump or challenge on the opponent.

Very interesting. But tell us a bit about your competitive history. You moved from Dominus Gaming (DG for short, although the original players have since also left to join another team) to VxP – what was the reason for the move and what are the differences between the teams?:
A VxP team-member asked me to join but while I was waiting for feedback, DG came to me as well and I decided to join them. I played for about a month – in the clan there were always new teams trying new stuff but no stability e.g. we were told shortly before a match about new players in the team and there was just no structure. My goals simply didn’t align with the clan’s and I therefore decided to quit. I had trials with VxP and was successful and got invited into the team as a main roster player. VxP has been around for some time and are also a well-known clan. The team-captain, dfthaman, was always professional, structured, organised, transparent, and passionate. Our goals aligned and that helped me to fit in and feel comfortable.

So you feel you fitted in nicely into VxP?
Yes. I have been with them for about 6 months now. We had our ups and downs, but we’ve grown as a collective unit a lot and I feel part of the team. Like right at the beginning we went through the usual honeymoon-phase. Then we went through quite a dry spell in terms of results. We managed to turn things around and now we are back and seeded 3rd for the VS LAN at rAge.

I am also interested in your personal game. What are you currently working on?
Ground dribbling, decision-making, and positioning. I thoroughly enjoy wall to air-dribbles, ceiling shots, and backboard redirects with ball-cam off. I usually practice through playing ranked.

In your opinion, what are the most important qualities to have as a competitive RL player?
Consistency is the biggest one.
Also mental strength – quick rebooting time is needed to put bad games behind you.
Furthemore, flexibility in changing what you are training is important to improve as a player. You can’t be an old dog – the game is evolving and you need to evolve with it.
I think creativity is also important.
Lastly, decision-making is critical because you can be the fastest and best mechanical player on the field but if you make bad decisions then it is game over.

Papa_Capes is not only strong on the field.

How do you juggle work responsibility, family life, and RL?
It is hectic. Gaming is a passion and I want to spend extensive time researching and playing games. But sleep is a big sacrifice. Basically, since high school, I have been used to a lack of sleep. I now usually play when my daughter is at the crèche and my lady is at work and then I also play until around 5 AM and then go to sleep. I sometimes sleep for only 1-2 hours before I go to work. My daughter has a fixed schedule and routine which makes it easier. I used to drink until the early hours of the morning and then went to work but I have been clean for 2 years now and Rocket League is my substitute.

What makes you excited about the local scene?
I see lots of potential in our local scene.
I also see myself as one of the originals of this scene. I am very involved and help to create awareness about Rocket League in SA. I want to be seen as a personality like Gibbs from North America.
And furthermore, socially it can be good because there is no peer pressure and it help kids to stay out of the streets.

Do you think local servers will improve the local scene? You also made a Reddit post regarding that with over 1k upvotes.
Definitely. It will give newcomers a fresh plate where they haven’t dealt with bad ping. My advice to the developers is to give Northern Africa servers for competitive playlists and to give local servers for private matches.

What do you think is the potential of Rocket League in SA as an Esport?
It will take some time to grow because it is still in its infancy. Many people have put the game down over the last couple of years, but with what ACGL, RLX, and VS Gaming are doing and giving people the platform and opportunity, coupled with the community’s help, I give this game 2 years to become a major Esport here.
And of course it has a positive social impact in SA – it can give kids believe and confidence.

What do you think about the mantra that a good player practices until he/she gets it right, but a great player practices until he/she never gets it wrong?
I like that and I agree with it. Rocket League is not really luck, although the South African golfing legend Gary Player said: “The more I practice, the luckier I get”. You need to drill in your moves until it becomes muscle memory. I do think that one should at least practice until the number of times you get something wrong in the game is less.

You used to play professional league rugby and club rugby. What has that taught you to apply in Rocket League?
The biggest thing it taught me is mentality. Big Match Temperament (BMT) is vital not to buckle under pressure. I believe that a strong defence is a strong offensive. And rugby has taught me that one amazing play can change the tide of the game.
And lastly, it sounds so simple but practice makes perfect.

Lasting advice for anyone who wants to become a top competitive player in South Africa?
Even before you are mechanically sound and fast, you need to have good decision-making – when to and when not to.
Play with better players than yourself. The game is also always more fun with friends. Get involved in the scene – become friends with especially the best players.
Spend a lot of time on Youtube and Twitch watching pros and tournament streams as well as RLCS (Rocket League Championship Series).
If you are the smartest person in the room you are in the wrong room; similarly, if you are the best Rocket League player in a party then you are in the wrong party.
Don’t practice because it looks good; practice to get your muscles accustomed to reaching the ball anywhere on the field and hitting it with any part of your car. So basically, expand the vocabulary of your playstyle.

One day when you are done with Rocket League, and you reflect back on your time, what would you like to say about your stint?
I don’t want to have many regrets. One thing I regret now is that in the beginning my time spent with the game wasn’t balanced – I spent hours trading, researching, and wasting time because I wasn’t part of the competitive gaming aspect. But the competitive scene changed all that and then everything made sense. Then I joined VxP and we are now seeded 3rd for the VS LAN. So I would like to be proud one day of what I have accomplished. But even after I retire I will still stay involved with the scene. I mean, this game is a universal language – everyone knows what “ggs” mean.

Before you go, how did you decide on the “PaPa_Capes” in-game name?
When I used to live in Cape Town, people called me “Capey”. Then it became easier for them to call me Capes. I added the “Mr.” prefix to my game ID because respect for people is very important to me. I changed it to “PaPa_Capes” when my daughter was born (she turns 1 year next month).

Thanks for your time and for a great interview. Any shoutouts?
Hey mom!

My missus for patience and allowing me to escape from stress.
To VxP for inviting me to try out and choose me as a main roster player.
To VS Gaming and ACGL for growing the community.
To more people to do what VS and ACGL is doing.
And lastly to you, dfthaman, for reminding me to be humble and to be chill. 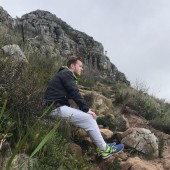